Mattis, who resigned last December after clashing with Trump on the president’s Syria policy, said he was honored by the “overrated” remark because Trump “also called Meryl Streep an overrated actress.”

“So I guess I’m the Meryl Streep of generals,” Mattis joked, “and frankly that sounds pretty good to me.”

“So I guess I’m the Meryl Streep of generals, and frankly that sounds pretty good to me.”

DEMS STORM OUT OF SYRIA MEETING WITH TRUMP: ‘WE HAVE TO PRAY FOR HIS HEALTH’

Trump had fired back at Streep in January 2017 after she spoke out against him at the Golden Globe Awards.

Mattis: “I’m the most overrated general. I’m honored to be considered that by Donald Trump because he also called Meryl Streep an overrated actress. So I guess I’m the Meryl Streep of generals, and frankly that sounds pretty good to me.” 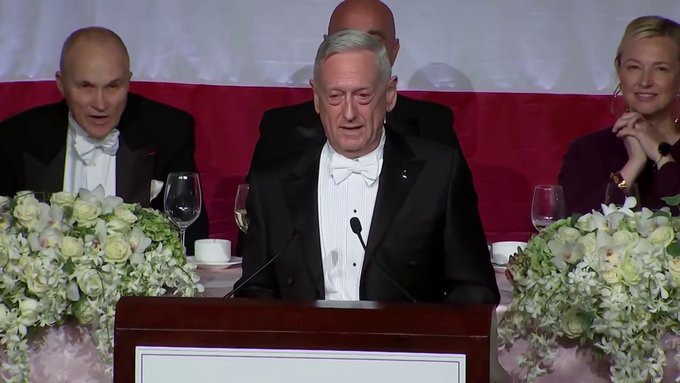 3,328 people are talking about this

The Marine Corps four-star general’s name came up in a contentious White House meeting Wednesday about Trump’s decision to withdraw troops from Syria.

A Democratic source familiar with the meeting told Fox News that Senate Minority Leader Chuck Schumer, D-N.Y., started to read the president a quote from Mattis from last Sunday: “And, in this case, if we don’t keep the pressure on, then ISIS will resurge. It’s absolutely a given that they will come back,” Mattis had said.

“You know why?” Trump said. “He wasn’t tough enough. I captured ISIS. Mattis said it would take two years. I captured them in one month.”

On Thursday night, Mattis also said that being called “overrated” by Trump didn’t bother him because he earned his “spurs on the battlefield” and Trump “earned his spurs in a letter from a doctor,” referring to Trump’s medical deferments from serving in the Vietnam War due to bone spurs.

“I do stand before you, as was noted here, really having achieved greatness. I mean, I’m not just an overrated general. I am the greatest, the world’s most overrated,” Mattis said to laughter and applause.

The Al Smith Dinner is named for Alfred E. Smith, who served as New York’s governor from 1923 to 1928 and was the Democratic presidential nominee in 1928, losing to Republican Herbert Hoover of California.

“I am so excited to be here tonight. I’m happier than Hillary Clinton watching CNN.”

The event typically features a celebrity host — and comedian Martin Short did the homors Thursday night.

“I am so excited to be here tonight,” Short told the crowd. “I’m happier than Hillary Clinton watching CNN.”

“Some of the most powerful people, elected officials, in America are here tonight,” Short said. “Plus Bill De Blasio.”

Trump stock market rally is far outpacing past US presidents